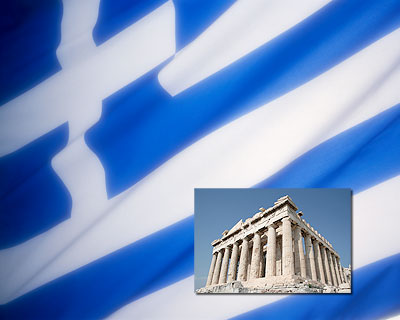 Greece is a beautiful country in Southeastern Europe, situated on the southern end of the Balkan Peninsula bordering Albania, FYROM and Bulgaria to the north and Turkey to the east. The Aegean Sea lies to the east and south of mainland Greece, while the Ionian Sea lies to the west. Both parts of the Eastern Mediterranean basin feature a vast number of islands.

The climate of Greece is usually hot during the summer and colder during the winter but generally the climate is more hot than cold and the sun is shiny even during the winter and autumn. As far as religion is concerned the Greeks are Christian Orthodox to their majority and most people are very religious.

The currency of Greece which used to be the Greek drachma has been replaced with euros as is the case with the majority of the European countries. Many tourists visit Greece during the whole year but especially during the summertime to pass their holidays on the incredible Greek islands that are admired for their unique beauty, traditionality, the friendly character of their residents, the local dishes prepared with local ingredients and the creativity of each location’s women.

Another reason why Greece is so popular is its history that goes back a long time to ancient Greece. The heritage that our ancestors have left us is very important and archaeological sites such as the Acropolis, the Parthenon, the Temple of Athena, Delphi, Ancient Olympia, Knossos and so many other locations are admired throughout the world for their special features and their uniqueness. 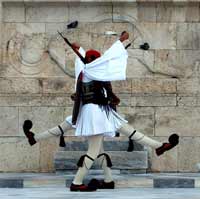 The term ancient Greece refers to the periods of Greek history in Classical Antiquity lasting from 750 BC (the archaic period) to 146 BC (the Roman conquest). It is generally considered to be the seminal culture which provided the foundation of Western Civilization. Greek culture had a powerful influence on the Roman Empire, which carried a version of it to many parts of Europe. The civilization of the ancient Greeks has been immensely influential on the language, politics, educational systems, philosophy, science, and arts, giving rise to the Renaissance in Western Europe and again resurgent during various neo-Classical revivals in 18th and 19th century Europe and the Americas.

Greece is so loved by people of other countries that it is very common for those who come as tourists one year to come back as employees the next season. They usually prefer the Greek islands to work such as Santorini, Rhodes, Kos, Crete and so on and that is the reason why you will see many foreigners working in clubs, cafeterias, restaurants, hotels and shops during the summers. During the winter they go back to their countries to come back the next year. They usually arrange their working positions while they are in Greece or they cooperate with work finding agencies of their countries who find them employment in Greece.

Greece is also admired for its nutrition and Greek food following the Mediterranean pattern which is the most nutritious of all. The Greek foods contain fresh vegetables such as tomatoes and olives, Greek meats, olive oil, Greek cheeses such as Feta which is only produced in Greece, Greek local wines and other spirits such as raki or tsikoudia produced in Crete, ouzo from Mytilini, a spirit produced in Corfu from citrus japonica and so on.

As far as education is concerned, it is compulsory and it comprises of primary schools and gymnasium, nursery schools and kindergartens which are popular, since most mothers work, but not compulsory. Children start primary school at the age of 6 and remain there for six years. The attendance at the gymnasium starts at the age of 12 and lasts for three years. After the students finish the gymnasium they attend lyceum for three years and later they can find a job or move on with examinations that will help them enter the Greek universities which are Highest Educational Institutions and Highest Technological Educational Institutions. Additionally, students over twenty-two years old may be admitted to the Hellenic Open University through a form of lottery.